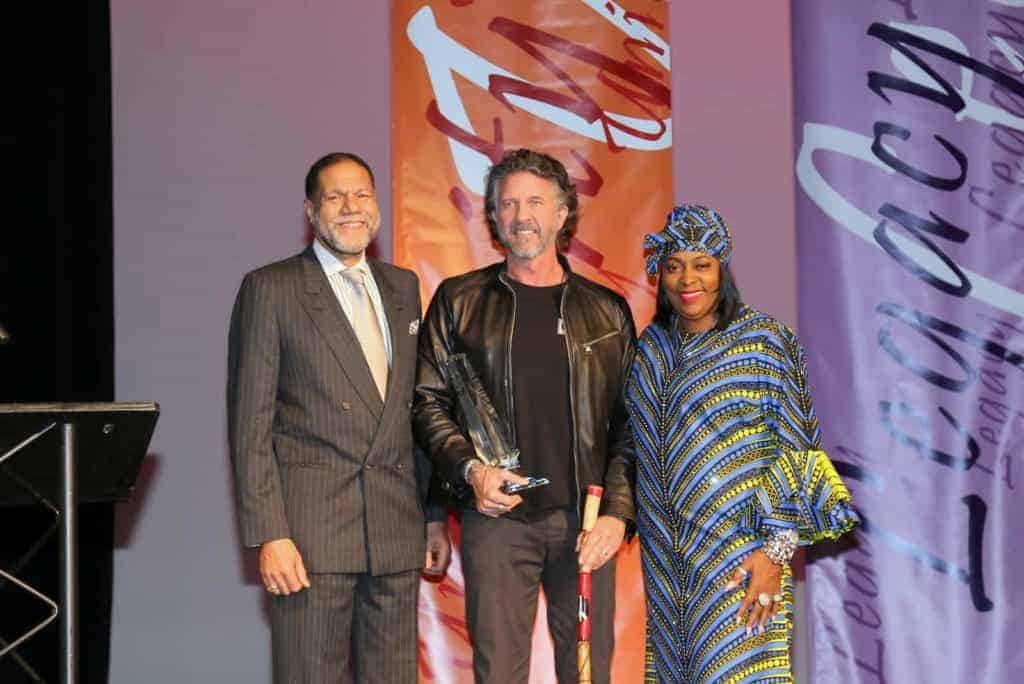 Shattering the pipeline from schools to prisons

Kit Cummings was surprised when they called his name.

He’d been invited to the Cobb NAACP annual awards celebration to speak, or so he thought.

The next thing he knew he was smiling for the camera as NAACP past president Deane Bonner and current president Jeriene Grimes placed the 2020 Living the Dream Award into his hands. “I was stunned. This means more than you can imagine,” he said.

It wasn’t the first time he’d taken a stage he wasn’t expecting. Cummings shook the hand of Ela Gandhi, the granddaughter of Mahatma Gandhi, after being asked to take the stage to speak at the Gandhi Global Peace Summit in Johannesburg, South Africa. Spoke with prison officials around a table in a Ukrainian prison about how the Power of Peace program could transform their population. Stood before a room full of the most dangerous convicts in Georgia as they offered him the opportunity for revenge on the man who had almost killed his son.

Now he has taken a seat at the table with the new Georgia House Study Committee on Youth Gangs and Violence as it seeks effective ways to address this threat in Georgia. Rep. Carl Gilliard, D-Garden City, leads the panel of experts who will take a hard look at how the state is dealing with gang violence and explore the most effective ways to take action, creating new legislation.

Their bill to create a Youth Gang Intervention Task Force (HB885) was presented to the
Subcommittee on Homeland Security and Human Services last week (2.26.20) where it is being amended before submission to the House. There are currently over 70,000 identified, active, affiliated gang members in Georgia, according to Cummings, and current programs are failing to prevent what has become a public safety crisis.

Cummings has also accepted a role on a Cobb County Gang Task Force helping to design a juvenile diversion twelve-month program called “RISING.” This gang accountability court is a first-of-its-kind pilot program designed to shatter the pipeline from schools to prisons.

In his small office upstairs on Marietta Square and next door to an Irish pub, he is surrounded by the totems of his journey. The “Living the Dream” award rests on a shelf directly behind him as he sits at his desk. “Roots” — a burnished, knotted walking stick — leans in a corner, never far out of reach.

Fashioned out of a discarded branch by a homeless man known as “Roots” and decorated with stripes of blood red, black and white, the iconic staff has become a touchstone of redemption. Students will call out its name when Cummings walks through the halls, and inmates gather around the symbol carved out of bent, discarded trash into a symbol of new life, emblazoned with a symbol of peace. The broken branch that went on a world tour.

His work with prisoners is a passion fueled by hundreds of hours spent with some of the most dangerous men behind bars. Men awaiting the needle or the electric chair on death row. Gang leaders feared by, well, everyone.

His Power of Peace Project brings hope where there was none. Using the words of this country’s most inspirational and effective advocate of nonviolence, Dr. Martin Luther King, Jr., Cummings has successfully brought his program of 40 Days of Peace to prisons around the country. “It’s about the dream,” he says. “They must formulate a dream that’s bigger than themselves.” Instilling hope — whether that is seeing a son again, or finding peace in changing ‘hard time’ to time with purpose — can transform a convict’s life.

While the U.S. accounts for only 5 percent of the planet’s population, it holds 25 percent of the world’s incarcerated. Given these grim statistics, Cummings is also focusing his efforts on those years that come before razor wire and shanks.

The Power of Peace Project (POPP) also provides real world tools and methods to empower teens to achieve their dreams and protect them. “Teams, campuses, and futures are being changed because of the passion of POPP,” says Mike Linch, pastor of NorthStar Church in Kennesaw, Ga.

“I have had the privilege of introducing POPP to numerous high school principals and superintendents in the metro Atlanta area, opening the door for hundreds of students to be reached and changed,” says Dr. Gordon Pritz, former superintendent of Douglas County Schools.

His programs are proof that the paths of the young can be changed, says Cummings.

Paintings crafted by convicts speak silent messages from the walls of his office. In one, a parade of men in prison garb walk toward the viewer down a green path littered with their discarded weapons, drugs, bottles, dice. They are young and old. Black, white, brown. A bearded man in a T-shirt and jeans walks in front, holding a white symbol of peace aloft.

The name on his shirt is Kit.

kitcummings.com, powerofpeaceproject.com
Kit Cumming’s most recent book “Peace Behind the Wire: A Nonviolent Resolution” is a Benjamin Franklin Digital Award Silver Honoree and the winner of the 2016 Georgia Author of the Year Honorable Mention for Memoir/Autobiography. 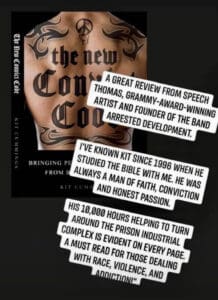